HOW PLASTIC IS MADE?

When I was a child, I wondered where the plastics came from. Is the plastic made of latex? Extracted from any plants? Is it a liquid that has been solidified? What and how?

In fact, some plastics even come from plants, such as cellulose acetate, which is obtained from cotton fibers. Latex is used for the production of natural rubber, but the vast majority of the rubbery materials we find out there are synthetic and have a very different origin. There is still PVC, which is partly derived from salt inputs, but the vast majority of plastics come from petroleum.

Petroleum distillation
In the refinery, petroleum is fractionated into by-products such as gasoline, naphtha, kerosene, diesel oil, lubricating oils and waste used to produce asphalt bitumen; and it is from naphtha that the substances necessary for the production of the main plastics are extracted, which correspond to a proportion between 4 and 5% of oil. The most important substances are propene, ethylene, benzene, butadiene, toluene and xylene.

Propylene - it is a colorless and highly flammable gas. It is the main raw material for polypropylene, that beverage box plastic that is also present in a range of household appliances. In addition, propylene is also used for the production of acrylonitrile, one of the components of ABS, a generally shiny, rigid plastic that is probably the housing material of the electronic device you are using to view this page.

Ethylene - is a slightly sweet odorless colorless gas mainly used for the production of polyethylene, the plastic for disposable bags and other low-grade products value. The PET from disposable bottles, and PVC, has part of its components originated from ethylene, namely, respectively: ethylene glycol and MVC (vinyl chloride monomer). From ethylene vinyl acetate is obtained, which is the raw material for the production of EVA, a kind of foam used in handicrafts and as shoe soles.

Benzene - from benzene is produced the cyclohexane, base for adipic acid and caprolactam, respectively used for the manufacture of polyamide 6.6 and polyamide 6, commonly known as nylon. Although best known for fabrics, nylons are one of the leading engineering plastics and are present in parts that require high mechanical strength.

Toluene - finds use in the manufacture of toluene disocyanate, one of the raw materials for polyurethanes.

Xylene - benefited may give rise to terephthalic acid, one of the substances required for PET production.

Some plastics depend on the combination of intermediate products from more than one of the above mentioned naphtha fractions, such as polystyrene, the plastic for children's party forks, produced from the styrene monomer, which in turn comes from ethylbenzene, derived from benzene and ethylene. Polyurethane, mattress foam and some rubber/elastic materials are formed from substances derived from propylene, benzene and toluene.

This stage of the reaction of chemicals and their transformation into plastic is called polymerization, and occurs within reactors in petrochemicals. The material just exited from the reactor is then passed through extruders, machines that leave the plastic in a state between solid and liquid so that the material is forced into a matrix. The die may have a design that makes the plastic take the form of fibers and may thus be wound on spools, such as nylon yarns; or the design may favor the extrusion of "plastic spaghetti", which are then cut into millimeter sections forming granules, also called pellets.

Injection molding machine
Parts with complex shapes - are produced using injection molding machines. The injection molding machines have a hopper where the granulated plastic is poured, so this plastic falls on a rotating screw pushing the material towards the front of the machine. In this way the plastic is gradually heated, melting. With a certain amount of molten plastic accumulated in front of the screw, the thread takes on the function of a piston, compressed the plastic against a part with a hole called "nozzle" and thus injected into a mold, which has cavities internally with the drawing of the piece. This mold has two or more plates allowing automatic opening after each injection cycle for the part to be extracted. 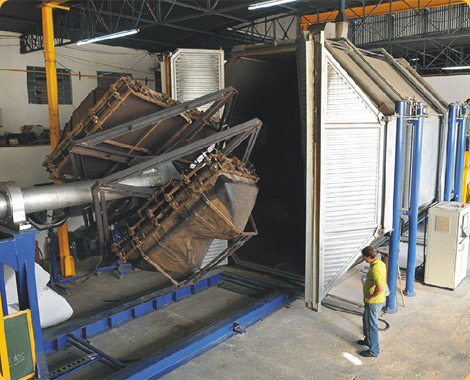 Rotational molding machine
Hollow and / or concave parts - mainly large ones are produced using rotational molding machines. In this process the plastic does not reach the transformer as granules but in powder. Here the plastic is placed directly and manually into the mold, which is then sealed, and rotated in and out of a kind of oven, with the aim of spreading the molten plastic all over the mold surface forming the part. 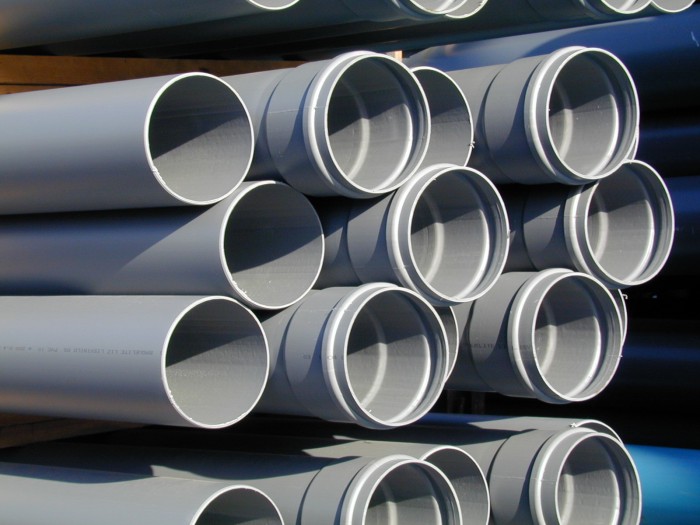 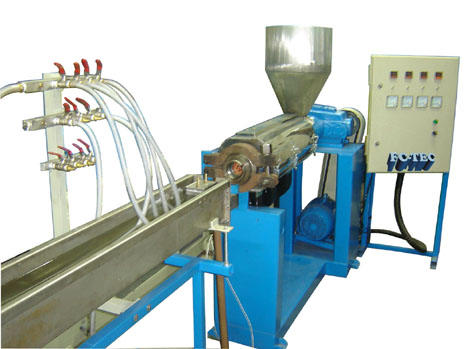 Extruder
Long parts - are produced using extruders. In this process the granulated or ground plastic enters a hopper and falls on a screw, just as in injection machine, the difference is that this screw does not act as a piston, making the rotation movement continuously. Unlike the injection machine, which has an injection nozzle, the extruder has a die on its end making the plastic take the desired shape. The part is cooled in a colling bath as soon as the part exits the matrix. 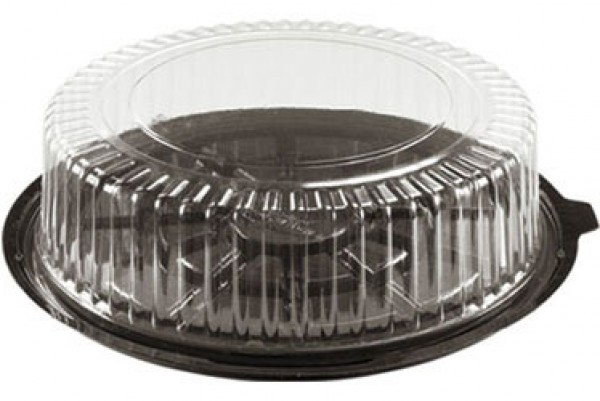 Thermoforming machine
Thin wall concave parts - especially low value ones, are produced through the thermoforming process. Here a plastic sheet (previously produced by extrusion) is framed, heated, and then vacuumed on the underside in order to make that sheet take the form of a mold. In some variations of this process the vacuum may be replaced by male and female molds on one or both sides. The machinery can be fully automated as well as requiring plate manipulation and part removal manually. 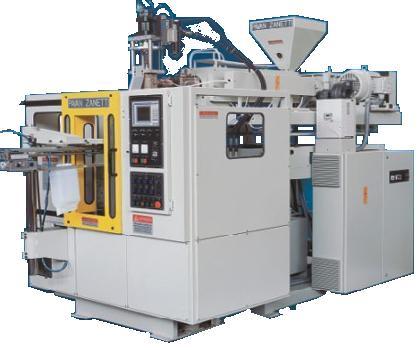 Blow molding machine
Closed containers - mainly small ones are produced through the blowing process. The blower consists of an extruder with a die that produces a kind of hose, known as parison , which when exiting the die points downward by gravity where two plates of mold close over her. Then a nozzle fits into the top of the mold, in the center of the parison, blowing air so that the parison takes the shape of the mold.


This article is intended for those who are plastic laymen. I hope you understand the language used here! If in doubt use the comments below. More information about each process or material can be found in the links of the text itself.

Article posted in Dec 21, 2019
About the author: Daniel Tietz Roda is Plastics Technologist graduated from the FATEC/ZL and Mechanical Design Technician from ETEC Aprígio Gonzaga, in São Paulo, Brazil. Roda worked 5 years with technical assistance and development of plastics in industries and nowadays is the publisher of this website.