After a long time without posting articles due to work in the new forum of the site, I come back here with an analysis on some additives destined to the recycling of plastics. They are additives from Basf (formerly Ciba) and its partner, PolyAd, which I had the opportunity to test and now I will present the result for you.

Basf is the largest chemical industry in the world, operating in areas such as polymers (plastics and paints), performance additives, catalysts, natural gas exploration, among others. PolyAd is a company that offers solutions in the form of combined granular additives (it is not masterbatch, the product does not contain resin, only the additive) for charged and smooth polyolefins, PS, ABS, PVC, PP, PE and engineering plastics as Polyamides, ABS/PC, ABS/PMMA, PC and ABS. This granulated form aims to improve the cost / benefit ratio in terms of dosage improvements, elimination of processing problems, productivity gains, improvement of properties and end use of its products by its customers. One of the focuses of PolyAd is to offer specific solutions for polymer recycling.

The additives tested in recycled ABS were:

The first two were tested on a recycled black ABS considered low impact, with:

First I did the tests separately, one batch with Joncryl and another with Recycloblend only, then I tested the two additives mixed with ABS to see if I could get a combination of improvements.

* I prefer to do impact testing on recycled ABS using non-notched specimens, because testing recycled ABS using notch in my opinion is like measuring a person's height in km instead of meters, as the machine ends up providing a very close, regardless of whether the material is too strong or too weak.

Because they were tests with small amounts of samples, the blends were handmade and extruded in a single screw laboratory extruder of the BGM brand. The injection of the specimens was performed in a laboratory injection-molding machine of the brand MG. Both the recycled ground and the granulated ABS already with additive were dried in circulating air oven for about 3 ~ 4 hours at ~ 80 ° C prior to their respective processing. 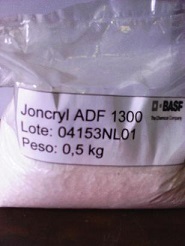 Incorporating 3% of Joncryl ADF 1300 in recycled ABS, it achieved a 13.3% increase in the flow index (3.4g / 10min), though the already critical impact fell to 11.7% making the material unusable for most applications.

A very important observation is that when mixing the Joncryl with the recycled ABS fresh out of the drying oven, it instantly swelled and it was necessary to undo the buds formed by hand! This led me to wonder what would happen if this additive were mixed with the ABS inside a production binder, where the temperature would be higher... There would probably be lint formation inside the binder and it would be very difficult to remove the material from there In view that the additive when heated has a glue-like behavior.

During the extrusion the material showed no abnormal behavior, and apparently the ABS gained a slight increase in brightness, more visible in the granulate than in the injected plaque.

Added to the timid increase in flow, the loss of impact resistance and this undesirable reaction during mixing, I did not see Joncryl as an interesting option for recycled ABS from a technical point of view. 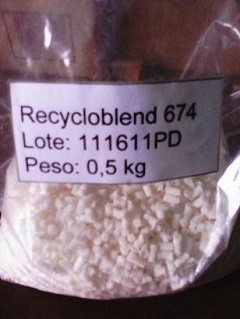 Incorporating 4% of Recycloblend 674 into the recycled ABS got a 24% increase in impact resistance, which is quite interesting. However, the drop in melt flow was 26.7%, which is very significant as well.

Unlike Joncryl this additive did not cause any unexpected reaction and had a satisfactory performance, the only critical point of it is this loss of flow, but from my experience with ABS I can say that there is not much difference between injecting a material with melt flow index of 3 (pure) and another with 2.2 (with Recycloblend).

I did yet another test with 6% of Recycloblend, but instead of increasing the impact resistance this higher proportion dropped it! It fell from 444 J/m of Recycloblend to 4% to 414 J/m (remembering that the sample with 6% was produced from scratch, I did not took the material with 4%).

In short, it's an additive that's really worth having to make corrections on recycled materials or maybe even using it on production line.

Seeking a combination of properties I made this mix of Joncryl with Recycloblend to see what came out, and as expected again I had problems with Joncryl's embarrassment.

The sample performed well during extrusion, even with the incorporated 7% of additives, and did not require any unusual machine setting.

The performance was well within what I expected:

That is, intermediate result between the test only with Joncryl and the first test only with Recycloblend. Which in itself is already unsatisfactory, since 371 J/m of impact is little for an ABS, and in addition, the blistering makes things even more difficult for the viability of this mixture. 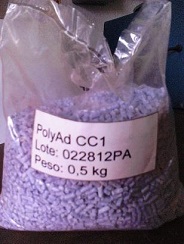 It is an additive used to reduce yellowing in white ABS, chronic effect of recycling. It was tested in the proportion of 0.5%, the granulated additive being mixed by hand and processed in a single screw laboratory extruder.

The result was not satisfactory, even the injected plaquet became darker because of the additive that is lilac and did not dilute well. However, I leave a caveat because the test was carried out on a small, lab-type extruder, and with single screw over the top. Most likely this would not have occurred if the sample were prepared in a production extruder, which I am unfortunately not able to perform at the moment.

Well, these additives are imported and their prices change every day, so since I want this page to stay a few years online, I will not be getting attached to the price, otherwise I will have to update it constantly.

What I can say is that Recycloblend today is 20% more expensive than decabromodiphenyl (used as flame retardant), just to have a sense of cost.

Article posted in Jun 14, 2017
About the author: Daniel Tietz Roda is Plastics Technologist graduated from the FATEC/ZL and Mechanical Design Technician from ETEC Aprígio Gonzaga, in São Paulo, Brazil. Roda worked 5 years with technical assistance and development of plastics in industries and nowadays is the publisher of this website.